Consumption at its best

I just read a not so long, but tideous book and I'm afraid it took me longer to read than it should have. Alright, so its harder for me to read when pregnant and falling asleep if a passage doesn't scream injustice in every line. The heart of the book, like most books except for Jane Austin's that always seem to end somewhat abruptly and anti-climaticly, was in the epilogue and I simply loved it.

I wanted to type up my favorite passages for further use and thought I would just make it accessable for any interested.

From Satisfaction Guaranteed by Susan Strasser 1989:


"Few consumers are familiar with either production or distribution processes; few consider their consumptin choices as matters of cultural or political importance. The marketplce is an arena of everyday life that most people accept uncritically--though perhaps sardonically--and think about as little as possible. . . Americans have become curiously comfortable with the idea that advertising manipulates them. . . The manipulation issue diverts attention from far more serious questions of power. . . More important, although twentieth-century rhetoric has conflated democracy with an abundance of consumer goods, the fundemental decisions about production are made on a one dollar-- one vote basis. Poor people are disenfranchised; in a culture of individuals who define themselves through products and product images, they hardly rate as people. . . On a systemic level, economic growth through marketing-driven production is fueled by waste: extravagant packaging, disposables, planned obsolescence and styling changs that create markets for replacement products. . . The ecological consequences of unlimited market creation demand a public discource about matters generally considered private: the things people buy and use every day, the ways they spend their time, the ways they percieve their needs. Although personal, our buying habits are not wholly private: they have public sources and public consequences. The mythology of consumption insists that consumers are kings and queens, that industry exists to serve us. Indeed, humble people do excercise choices and enjoy comforts available only to royalty in previous centuries. . . . But a belief in progress is more difficult to sustain in the face of environmental destruction, of market segmentation that codifies increasing class distinctions, and of a consumer culture that itself breeds constant discontent, depending always on individuals wanting more. Despte shopping malls full of things to buy, we are denied satsifaction that we identify--and romanticize--in our own past and in the activities of other human cultures: a sense of community, meaningful work, and time not consumbed by getting and spending." 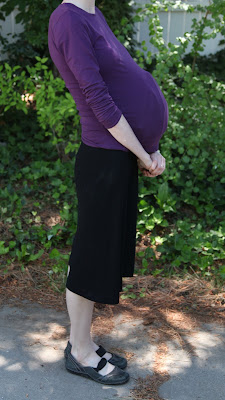 Okay, you asked for pictures of me all of a sudden showing. It's amazing how quick the baby grows, eh? 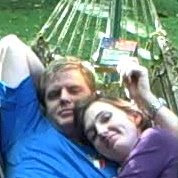 It has been found!!!

Thanks to a certain Krista who is a genius and googled my names, my original post has been found. I guess I posted on my family blog and not my personal blog to keep them safe:

"I just came from having a conversation with dad and my friends.I have discovered that I have a special love for some names that I don't even want you to think about stealing just because I'm the youngest and am not close to having these 29 kids:

There. As you can tell, I may just have to put some of these too normal of names as middle names ;)

I later added that Andrew and Grant could be seperated and also:

So last year before I had even started dating Stephen, I had made a list of names for all my children. I have checked my old blog and I can't find that posting anywhere. I don't know how I could have possibly deleted it. Anyways, I can only remember a few, so here they are:

look how my memory is failing me! I had some awfully good ones, I'm so disapointed I can't find it anywhere in the archives.

I'm going to my 18th week checkup on Monday. I most likely won't find out the gender then, unless the doctor has mercy on my inablity to have patience to see if Kumkuat is growing at all and orders an ultrasound earlier. Anyway, go ahead and add your suggestions for names for both a boy and a girl otherwise a Wilberforce is what you get.

on a happier note

Just to let you all know, I am now officially showing. Up to this morning, everytime I would say "hey look, I'm showing!" to Stephen or my mother they would simply shake their heads and negate my assertions. Today, however, both of them conceeded.

Oh, and I also have my very first stretch mark (from pregnancy that is, I already had some from my time spent in bratwurst land). Since I have another 40 pounds to gain, I'm sure that won't be the last stretch mark either.
I'm particularly happy about this because I've had a hard time gaining weight (I am suppose to have gained 10 pounds already and only today have I found that I have gained a pound) and I've been worrying about starving my child. Thus, when all of a sudden this morning I was showing, I was particularly pleased. Of course, it may not be the baby that is showing, but all the Ensure I've been drinking that has made me look like an old lady. oh well. live long.
me
Posted by Rachel Leslie at 2:21 PM 10 comments:

tirade of the day

Last week, the NYTimes had an article on Mormon missionaries who come home and go into sales using many of the same tactics they learned on the mission. When I saw this article, my heart sank. (Mormon missionaries to salesmen ). I'm no expert on missionary work, but something tells me that a message so wonderful deserves to be taught in a different method than sales tactics. (Granted, missionaries are NOT taught to employ the mirror approach etc, and yet I cannot deny a definite business like model).

While Stephen claims that his major studying dictators and genocides should qualify for the most depressing, I'm afraid studying consumption and advertising is much worse for me, perhaps because I cannot distance myself from it or because it is so much more subtle and damning in its effects. Rarr.

I think I'm going back into my Gandhi phase and I might go a little extreme for a while. Wait, maybe not since I just spent 90 bucks on groceries last night. So much for trying to eat healthy.
Posted by Rachel Leslie at 10:50 AM 2 comments:

I was about to write a posting about my mother reading my sister's blogs, but never mine (though they may live hundreds of miles away and have cute kids, and I see my parents every day since I live in their basement, but SURELY they could never get enough of me, eh?). Moreover, if I want my parents to actually read a blog entry, I have to print it out for them (such as the posting of the 15 best things about being a Donaldson) because that's the only way they'll look at it, maybe, 20% chance. However, this mature and long suffering nature of mine will endure and instead I'll write about something else.

Me and James. Yes, thanks to Ruth sending a picture of me and James, I will memorialize him (and myself) on this honorable blog. Isn't he a looker? 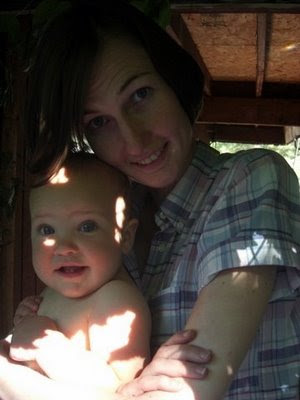 These are the kind of stories that just leave me hanging on edge? Where are the details for a story like this. You can't leave it at that!

to keep me from being a hippo of a hypocrite

Since I don't like it when other people never update their blogs, I should probably update my own.

So the whole Mark McDonald clan met up this last week, unfortunately there was an embarassing lack of bagpipes, kilts, and pictures. You'll just have to trust me when I say my family is cuter than yours and has bigger calves. There were only 2 days of overlap with everyone there (except for Amme who had her tonsil's out), but I think it will come to a 3 week total of family chaos. What a dream come true.
Posted by Rachel Leslie at 10:42 AM 3 comments: