Monsters in the closet?

I think come time to pay my electricity bill, I will appreciate having the desire for sleep become stronger than my desire to ward off cockroaches by keeping my lamp on all through the night. Hmm. I think it may be time to get our mattress off the floor and onto a bed frame far from the carpet with these crawling critters.

Getting a bed, however, might make life too easy and get in the way of this:


Stephen's dream is to be old like this (minus the garden). I don't think holding my great great great grandchild sounds too bad either.

Sunday's forecast for Philadelphia? We get the left over hurricane coming up the coast. And yes, this time we'll go prepared to Church with umbrellas, a stroller rain cover, or perhaps just taking a zipcar.

Stephen was quite excited to feel the earthquake earlier this week. I would have been excited too, but I didn't feel it since I was in our sturdy kitchen and not sitting at our not so sturdy desk we put together ourselves like Stephen was. 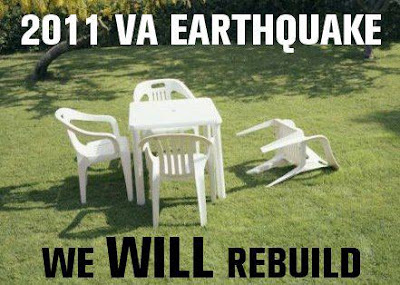 (thanks Brittany for passing along the picture)

As if hurricanes and earthquakes weren't enough movement for one week, it seems that my uterus has decided to join the party of wanna-be big, but only mild movements.

Yup, Rachel is having contractions and is dilated to a 2 (when you hit 10 is when you start pushing the baby out). But actually lots of women are dilated for weeks and weeks and are just fine and it appears that my contractions are lamo contractions (and yes we want lamo contractions at this point) so hopefully I can stay at a 2 for a while yet). They gave me some shots to develop little Simeon's lungs just in case. But since I'm only just 8 months pregnant today and have two more months to go (they don't tell you this beforehand, but 9 months of pregnancy means 9 full months) we're being cautious and taking it easy. What does "easy" mean? It means Stephen makes me one-eyed jacks at 11 o'clock at night and I sit and read books about Indian cuisine (it makes me hungry even if I just end up eating PB&J's), browse Craigslist for kitchen tables, and write blog posts about my justified laziness. Granted the doctor didn't put me on bed rest so perhaps it isn't justified, hmmm. Still when she tells me to take it easy, but that I'm not on bed rest I've deduced from these instructions that I probably shouldn't walk 5 miles in one day like I did on Wednesday and that this is as good as time as any to enjoy Stephen's previously hidden cooking skills.

p.s. There are a lot of pregnancy symptoms no one ever tells you before you're pregnant, but just in case you're wondering I'll share the secrets so you can't say no one ever told you they didn't and at the same time use this opportunity to complain to the world:
-nose bleeds
-feet grow (even if they haven't swelled up)
-eyesight worsens (and though they say it should go back to normal, I don't think mine ever did)
-when you drink water, it goes through immediately and then the nurses tell you that you might just be dehydrated even though you just drank more water than it takes to put out a forest fire.
-leg cramps that hurt more than childbirth in both legs and feet simultaneously
- You might have already guessed this one, but: a preoccupation with your own pregnancy to such a degree that people stop reading your narcissistic blog.
Posted by Rachel Leslie at 10:01 AM 8 comments:

Before we left Provo, Stephen's Grandmother Elaine told us that "when you want to be at home in your own bed, you're having an adventure." I've thought of that line several times this past week and smiled.

Life is actually going surprisingly well. The first day in our apartment was a little overwhelming with how very low the ceilings were, but as long as we don't wear shoes with more than an inch heel, we're okay through the entryways. Our friends Jenny and Brent have been wonderful and lent us an air mattress and pack n' play until our furniture arrived. We have ants, but washing everything down with vinegar has seemed to help keep them to a minimum. It's a good reminder when I see small moving black dots on the counters that I don't want bigger black dots so I clean up after myself. Alas, Stephen has already seen three cockroaches. They come in our apartment through an incredibly small space between the floor and the wall, I still don't know how they do it. I've adopted the policy at night of turning on the lights with my eyes closed and waiting a couple seconds till I open them so that the roaches have a chance to disappear so I don't scream. The things I love about the apartment and have been keeping me from going back on our year long lease has been the ramp that goes straight to our door (all the other homes around have at least 5 stairs to go to the main level), the tall shower head that means I can actually wash my hair without having to crouch down like I did at Wymount, the bright windows, and a dishwasher.

To do the wash I have to go into the alleyway behind the building. The only problem is there is trash and broken glass all over the place and I saw a dead mouse on one of the stairs. I'm beginning to doubt my commitment to cloth diapers during our sojourn here. Yes that's right, when plastic diapers have filled all the landfills you can blame it on me happening to see a mouse and deciding against cloth diapers after all. Maybe I'll keep these cloth diapers I just got for child number two or if we move. Anyway, critters aside, this apartment is looking more homey with the furniture we bought off Craigslist and Ikea. We made it on public transportation to Ikea, stayed too long and had to take a Taxi with no carseat home, but hey we got furniture and even a nifty cheese grater that I have been eyeing for a while. Of course, it being IKEA, we found out we got the wrong items and had to return. All the smarter and wiser from our last attempt, we took a Zipcar and Stephen masterly drove through downtown Philly and the freeway, much of it improvising as Google Maps failed us. Of course, an ambulance right behind you in the downtown area blaring its horns when you have no room to get out of the way is enough to rattle most drivers, but Stephen handled it pretty well.

Something both Stephen and I had been looking forward to was attending church. Last Sunday we called the phone number of rate ward listed on www.mormon.org and found out that our meeting started in 25 minutes. We got ready as fast as we could and ran out the door (a not uncommon scene on Sunday mornings with us). It was sprinkling when we left but soon there was a downpour of downpours. Poor Christian had been in an umbrella-less umbrella stroller and though taking the warm rain like a trooper, was wet as anything; we all were. We stripped him down to his diaper and sandals and the missionaries found us some baptismal towels. A thoughtful woman went out to her car and found us a t-shirt and towel and we decided to stay for the entirety of Sacrament meeting, even if we did look like hooligans. When Sacrament ended the same sweet woman who had gotten us a t-shirt from her car had gone out and bought us a hairdryer. We were amazed and decided we should perhaps stay for all three meetings after all. We dried out Christian's clothes as much as we could and I gave myself a meager blow down. Stoic Stephen felt he was dry enough at that point. Anyway, we kept meeting nice and amiable people and as we left church in a weak drizzle, someone offered us a ride, and they even had a carseat for Christian. Needless to say, we were quite impressed with the ward and hope at sometime in the future we can be the ones looking out for the soaked hooligans. We have since decided to invest in a stroller that has a rain cover and can't wait for its arrival. Because of the high buildings, it's hard to see too far in the sky and thus hard to predict rain and weather. We've been caught in another large thunderstorm since then, but luckily we didn't have to sit in church for three hours afterwards and Christian could simply play around in the puddles having the time of his life while I stood under the shelter of a covered entry way and made small talk with the woman waiting for her partner in the co-op.
Christian has a horrible gash on his cheek that we hope won't scar from hitting it on a bookshelf in the library. What can I say, these Philly neighborhoods are rough.

Hmm let's see, any other adventures? It seems we are having one or two every day, but they are keeping life exciting. As much as we loved Provo, we're eager to try something new and we've enjoyed the adventures the more urban life has brought so far. Granted, giving Christian a drink from the used water bottle of the generous Indian woman chatting with me at the park probably wasn't the most hygienic move, but hey, we've got to keep these germs globalized, and she seemed plenty nice and in good health, so why not? The sirens day and night remind us to lock our doors, and the ice-cream truck that plays its tune at 11 p.m. makes us laugh. The tree lined streets with old Victorian homes leads to a park full of happy kiddos (in fact there are a ton of kids in our area) and there are tempting ethnic restaurants on every side. Who could ask for anything more?

we're here and thesis is there

We arrived in Philly today. It is still quiet surreal that this is not just a two week vacation, but I'm sure it will sink in soon (hopefully sooner than our sinking ceilings that are only a couple inches above my head). Also good news, I defended my thesis, turned in the needed signatures, and am done with my masters. I'd write about how relieved about that, but I'm falling asleep, sigh.
Posted by Rachel Leslie at 4:12 PM 6 comments:

Not "good night" but hello

hello, I'm Christian who in one day has finally figured out how to successfully escape my pack 'n play and open my door a week before we move. Haha now my parents are struck with no alternative but take turns sleeping, go borrow that crib back, see if I eventually get tired enough to sleep on the toddler mattress not yet given away, or just see how long I can go without sleep.
Posted by Rachel Leslie at 3:16 PM 7 comments: