Perhaps in a desire to follow the path of his uncle and great uncle, Simeon, as of late, has started to show an early interest in Ophthalmology--specifically Joshua's.  We're trying to keep his interest at bay, alas Joshua has almost undergone several near surgeries with nothing for tools but fingernails.  His unrequested surgical attempts are nothing personal, mere curiosity. 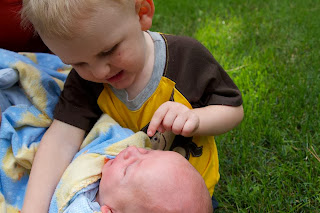 In reality,  both Christian and Simeon love their little brother.  Simeon's second verb ("eat" being the first) is "hold" when he demands that he "hold baby!"  Both he and Christian get right up in his face and talk in high pitched voices to him.  Simeon says "ooohh babyo" when Joshua is crying  and he is trying to comfort him.  One day when I was in the shower and had put Joshua in the stroller for protection, I came out to find Simeon right up there in his face.  Joshua was singing to him his "Daddy, Mommy" lullaby which consists of him singing daddy and mommy over and over again.    I frequently find Christian quietly making his way over to the baby just to watch him.  When either Stephen or I accidentally call Joshua Simeon instead, he quickly corrects us with an almost disbelief that we could ever accidentally switch their names.

All this isn't to say they're never too rough with him, but I'm glad that my wild boys are tender on the inside.

Thanks Opa for the picture!
Posted by Rachel Leslie at 9:31 AM 3 comments: