Yesterday I realized that Christian has started telling his first jokes. He'll point to a toy and say "Thomas?" when he knows it is Rosie and then smile from ear to ear and say "noooooo" and then laughs hysterically.

Simeon just turned six months and I'm wondering where my bony-bum-boy went. He's chunked up significantly, such that he's grown an extra chin. He loves to gaze at Stephen and what with Stephen's shaved head their beginning to look quite a bit like each other.
Posted by Rachel Leslie at 11:17 AM No comments:

Sorry I didn't take any pictures of the pro-gay marriage people.  I find their rainbow flag really does make them seem so harmless, that it doesn't really do justice to take pictures of them. One needs to be there to hear their angry voices too.  Instead you can see us, and since Stephen had allergies, he hardly had any voice at all. 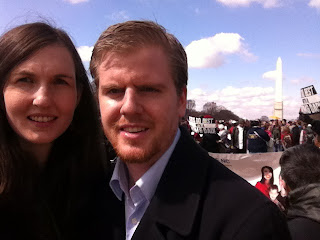 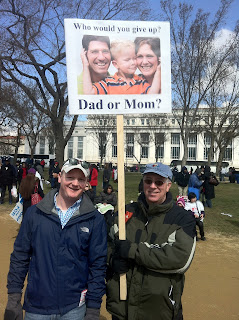 The proof we were really there and we didn't just sleep in: 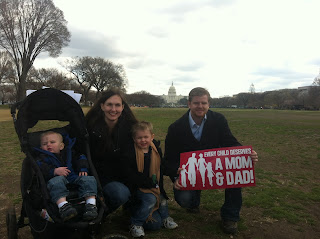 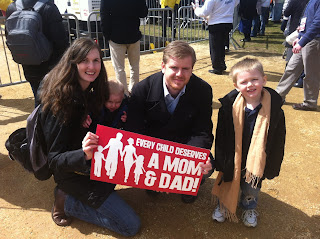 So pictures are on our phone which we believe is currently on a chartered bus somewhere out of batteries, but . . . DC today was awesome!

In lieu of pictures, we made headlines . . . kind of . . . or at least our friendly Catholic co-protesters who we hitched a ride on their bus did.  Yes, that bus is the bus we hopped on.

We also got stopped and asked if Stephen or I would be interviewed by PBS news.  I was tempted, but let's face it, Stephen can out debate anyone I know on this topic, so I thought he would be the better choice.  He was great, but unfortunately left out any hate threats and failed to invoke any divine wrath, so I don't think he'll be on the news tonight.

One of the Catholics said a prayer as we left on the bus which included a blessing on those protesting against us, so I decided not to laugh in the face when one of the Pro-Gay Marriage protestors told me that we're the new KKK.  Too bad I forgot my hood and burning torch in the bus.

Here's some from the NOM blog.

Unfortunately our bus was a little late, so we weren't part of the huge group marching, but it was still significant when we got there.

The event was topped off meeting  Carl and Susan for  lunch at Union  Station. They're always so much fun to meet up with and the kids loved having their aunt and uncle appear out of the blue and warmed right up to them.

the things they say and do

I know, I know, the "cute" things kids say doesn't really translate when put in blog language, but Christian and Simeon are really growing up and I would hate to not document it in one way or another.

At church we often sit next to two girls, one of which is three turning four.  When we first started sitting with them, the three year old would just sit quietly, never making a noise.  Now that we've been sitting with them for a while, she's started laughing and joking, wanting to color etc.  Christian announced very loudly on the pew last week that she "wasn't being reverent"  hmm, I wonder where she learned that from?

"So what's the plan today?"

"So *smacking of the lips* we can go to the party in the kitchen (where he has taken out all the plastic bags and strewn them across the floor) or read books or go to the hallway.  This is made complete with hand motions.

"Let's play tic-tac-toe"   (We've never played that with him)

Simeon is attached to a bottle of mint oil.  He somehow managed to loose the lid yesterday and took a swig and all this morning has been chasing me around for me to open it again.

He's the strong silent type, but has a few words he'll use "uh oh" "dada/daddy" "ba" for bye, "ma" for more.  His piglet squeal, however, remains his most effective form of communication used whenever his older brother is being a bully, he's tired, he just wants to scare the living daylights out of me when I'm in the other room.

Both boys have turned into snuggle-bugs and they both sing.  Christian sings when he wakes up, and Simeon when he's falling asleep.  Both of them sleep talk/moan.
Posted by Rachel Leslie at 10:34 AM No comments:

So it's not quite Serbia, but Stephen and I are off to riot . . . okay, well not riot, simply demonstrate.  We just reserved our spots on a Catholic bus down to DC on the 26th to join a march for marriage while the Supreme Court reviews the Prop8 case.  Anyway, I'm trying to think of witty signs that will get us national coverage, so please feel free to put any ideas below-- I'm afraid only bigoted ones will do.

On the topic of children's rights, zoning laws apparently don't prohibit a family of 5 in a one bedroom in our apartment complex, so we might just be able to pull off three kids in a (spacious) one bedroom after all, the remaining question is whether the road to insanity has stricter requirements, let's hope not.