I just wrote a big ole long blog post about my personal feelings on this topic, but I'm afraid I'm still trying to figure out what those feelings are.

In the meantime here's this wonderful article that I ran across when searching for a quotation. I know for most people this topic isn't an obsession like it is for me, but I do think it's worth pondering.
Posted by Rachel Leslie at 6:25 PM 10 comments:

what I didn't know before marriage

Yesterday when Stephen was taking Christian to the duck pond, library, and letting him play with the water from a fire hydrant so that I could work on my thesis I started thinking about the article below and Stephen and my courtship (June-October).

You see, I thought Stephen and I were pretty good at getting to know each other before we got married, but it hasn't been until the last few weeks of my 2nd pregnancy that I've truly doubted that emotional intimacy.

When I'm tired, Stephen refuses to brush my teeth, take out my contacts, or say my prayers and repent for me. He even refuses to get me a bed pan so I don't have to take three whole steps to the bathroom in the middle of the night.

It makes me think I should have waited until we were in our 90's to see if he would have done these things for me, alas too late.
Posted by Rachel Leslie at 10:56 AM 4 comments:

My favorite marriage article yet.
Posted by Rachel Leslie at 2:08 PM 1 comment: 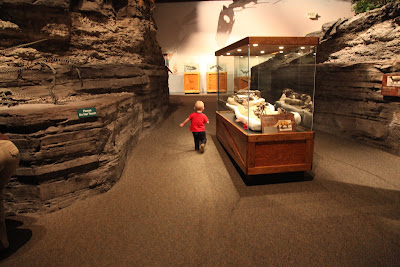 This is Christian probably running to find Ba-Pah. 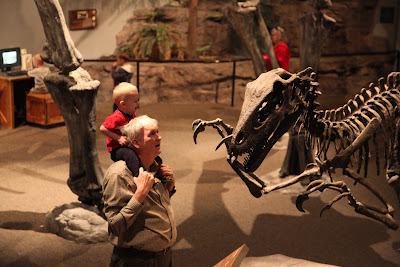 Christian loved the Dinosaur Museum, though I suppose it's hard not to when you get to skip the stroller and instead get a ride on Ba-Pah's shoulders.

So Christian still does not say Mama or Dada, but he says Ba-Pah and sometimes it really sounds like Grandpa. He knows when we're pulling up into Ba-Pah's driveway, and calms down when he's angry in the car if we tell him we're going to Ba-Pah's house. When he goes in the house he searches every room until he finds his Ba-Pah. When he does, he doesn't leave his side unless it's to go on top of his shoulders as seen above. My own Grandpa sees this and says he's never seen a grandchild love his Grandpa so much, says he's like a third parent, and is worried about what it will do to him when we move. Sigh, me too. Poor kid will have to live with just a mom and dad that love him, how cruel.
Christian has also started calling other male people he likes Ba-Pah too such as his Opa which he adores and, as of yesterday, an Uncle Xan. Hopefully Mom and Dad will get names soon too. In the meantime, we'll let my Dad have his personal "Klingon" as he calls our little guy.
Posted by Rachel Leslie at 1:30 PM 2 comments:

and have been since April 6th. It seems the New York Times has decided that they should be getting paid for what they do and not have leaches like me reading their on-line articles for free. They've come up with a 20 articles for free a month and after that you have to pay. Ugh. Don't they understand that they are my go-to website when no one has e-mailed me (which no one does), no one has updated their blogs, and I really don't want to clean my house or work on my thesis? I suppose I could pay the 99 cents a month and get unlimited access, but it's probably good for me to cut out one more website in between me and productivity. Perhaps that will be my gift to myself once I get that thesis defended (June). I've tried other websites, but they're layout is so ugly and non-user friendly. Foxnews is the worse looking like a magazine cover at a checkout stand with all their celebrity gossip. Will BBC remain the only other viable source of information? Well, until June when I defend my thesis, feel free to post interesting nytimes articles on your g-chat or blogs. . . I guess it's time to start that vacuum.
Posted by Rachel Leslie at 7:51 PM 2 comments:

We're moving and making those painful decisions about what to pack and what to give/sell that should never have to be made by someone who can hardly decide what to eat when hungry, much less what I should keep as we enter the exciting years of PhD poverty. Two Gandhi quotes have been whispering in my ear as I do so:

"[A] great burden fell off my shoulders, and I felt I could now walk with ease and do my work also in the service of my fellow men with great comfort and still greater joy. The possession of anything then became a troublesome thing and a burden."

That quote has come to my mind as I look at moving rates from pods to moving trucks.

This next quote however makes me wonder what I'm doing with the stuff at all:

"And I said to myself: possession seems to me to be a crime, I can only possess certain things when I know that others who also want to possess similar things are able to do so."

How do we settle such a thought? Yes it can be dismissed, and perhaps must, but how?
Posted by Rachel Leslie at 9:36 PM 6 comments:

So Stephen's in the middle of reading a book (The Genius Factory) about a sperm bank that recruited heavily from Nobel Prize winners and gold medalists etc. He informed me today that he thinks if he were to donate, his donation would be a rather hot item: Ivy League PhD student, 6'2, blond, blue eyes. All he's lacking (according to him) is that he's not a marathon runner yet. I guess I should feel lucky to be pregnant again by such a valuable commodity.
Posted by Rachel Leslie at 1:38 PM 12 comments: