Well if you're family in Utah, probably not as we just spent three weeks crashing your homes and parties--it was delightful.  We had a mini-reunion for my dad's birthday on the 28th with everyone there. 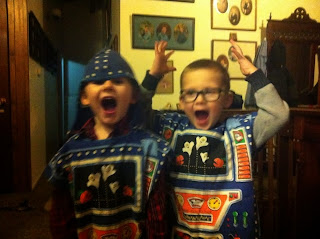 It had obviously been far too long since we have had a reunion as several of the nieces and nephews asked what my name was again. I tried to convince them that my name was "favorite," but none of them bought it, not even Jonathan who said, "I don't even know who you are," to which I replied, "I took you to another country and back without your parents."   (Oh the joys of Tijuana).   Here is an incredibly pixelated picture of the entire Donaldson clan so that you can't see how miserable we are when it comes to family photos.

Stephen's brother Caleb returned from his mission in November.  Before he left, Christian loved to steal his cell phone and dance to it's music.  When we met him again, the kids weren't sure who he was.  It took about two seconds, and then they were chasing him like they had known him their entire lives. 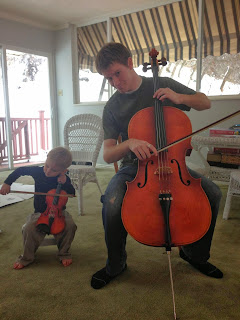 Simeon loved loved the music room at the Cranneys, especially their children's violin that he used as his personal cello.
The air quality made me question wanting to return to home to Utah to settle and simultaneously brought out the dormant, but passionate environmentalist in me (and thus a violent environmentalist in Christian who decided he wanted to"kill" all the polluting cars--hmm, I might have to tone down my griping if we don't want an eco-terrorist on our hands).

Another reason the trip was wonderful was grandparents.  There's nothing in the world quite so wonderful and grandparents that love their grandkids. 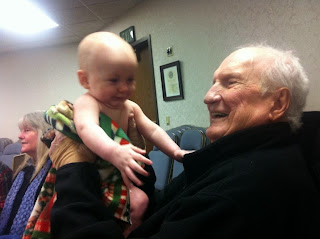 We should have taken more pictures, but we were having so much fun.  We especially enjoyed what turned out to be our last visit with Stephen's Grandmother Cranney.  We dropped by with the kids while she was sleeping.  We were talking to Stephen's uncle and aunt who were there until she woke up just as we were going to go.  She had the most peaceful loving face as we talked together.  Christian sang "Away in a Manger" and she joined in---it couldn't have been sweeter.  Three days after we came home she passed away at the age of 95.

Really the trip was just wonderful, yes it was a pain to fly into Las Vegas (tickets $75 as opposed to $335 if we flew to SLC), but what's the point of having two wonderful families with cousins and uncles, aunts, grandparents and great grandparents if you don't every once in a while, spend Christmas with them?

Really no need to make that family photo so small unless you are being nice because my baby is the one throwing a tantrum in my arms while I smile peacefully as if nothing is happening. Couldn't we just photoshop a sweet one of him in? He can be quite the charmer when he wants to.

I do miss you! It was wonderful to spend time with you guys and your adorable boys.... before I thought I was about to die from the flu. Really, Joshua is such a cutie pie. I could just hold him for hours if I didn't have my hands full already. Not, that you don't. ;) And I love your little Piano Guy - unbelievable, that Mozart in the making. Christian is too handsome for words and quite adept with weapons I must say.

I didn't realize Stephen's Grandma Cranney had passed away. I am glad you were able to see her with your little ones first! She must have felt it was a good time to move on to her next adventure. Isn't Grandpa the best? We really won the lottery by getting him.

We loved seeing you. I think Nathan had the time of his life playing with Christian everyday. I can't wait until you live closer so we can see each other more often.

What a wonderful holiday season! I'm so glad you were able to go and visit! I LOVE that you tried to tell all of your nieces and nephews that your name was "favorite" - classic!