So Stephen and I are trying to figure out the best way for Christian (and us) to sleep. Current methods consist of one of these in our bed: 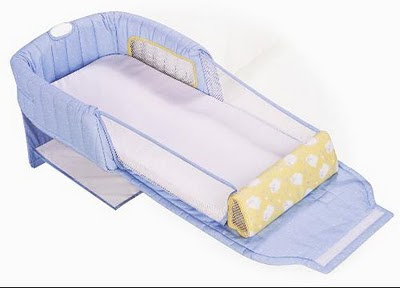 but Christian usually falls asleep nursing in my arms. Yet, the last couple nights I've been tempted to use the crib (perhaps upstairs so the landlords can take care of Kumquat, ha!) because he is waking up EVERY 10 MINUTES and nursing. However, I just read this wikipedia article about co-sleeping and figure I can manage until Christian gets back on his beautiful sleep schedule he once had at night.

As long as we're on the topic of the things parents sometimes do, but are considered crazy for doing it, I'll mention our attempts of cloth diapering.

It hasn't been bad. We've been using Chinese prefolds with simple plastic covers, except for the two cute covers from our friend Amy. Other than a stinky leak on a dear friend earlier this week, and forgetting to put the plastic over the prefold when we were going out to eat with Stephen's grandparents (everyone wanted to hold him and he was soaking wet) it has been great! We still use disposables (thanks to the generosity of a certain Brian and Erin) when we're going to church, campus, or are just too tired. Yesterday we bought our first pack of disposable diapers ever and hope it will last us for the next four months. We're just waiting for a deal on this site to order the bigger size for Kumquat. In total for cloth diapers we've probably spent $65 for the prefolds, $12 for the plastic covers and snappis. I'm not sure what the energy bill would add up to be, but we try to hang the diapers when we're not in a hurry to help reduce that cost. My mama gave us a great diaper pail to make the whole process less stinky and more sanitary which I definitely recommend if you're going to do it.)

p.s. This is deserving of its own post, but Christian has his first Cranney cousin! We made a visit yesterday to see this handsome little fellow, and ohweee, I think he's a keeper. I'm afraid our camera was out of batteries, but hopefully we can catch a couple photos in the next few weeks.
Posted by Rachel Leslie at 8:24 AM

what great parents you are. when do you plan on sending Christian to his own bed?

I guess if you are going to do things the hard way (co-sleeping and cloth diapering) it's good to do it with your first. However if you and Stephen are still planning on 15 kids you may have to change some of your parenting techniques--especially the co-sleeping one.

I think he is going to nurse as much as he can when he has you so close, you might all sleep better with a little space, but your the mom you know best. Love you lots sweet sister.

Wow, you cloth diaper? I don't know how you do that. I'm glad it's working out for you, though. Good luck working out the sleeping. When you move him to his own bed, The Sleepeasy Solution book might be helpful. It helped us get Julia sleeping through the night and get her napping better.

Hi Rachel! What fun, I remember the nights...and days:). Our kids loved to nurse but it seemed like just when you got on a schedule that's when they go through a growth spurt or start teething and change their whole routine! I have actually always wanted one of those co sleeper things...our kids did ok in the cradle next to the bed but this time around I am so tired I think being able to just have them right there would be great! Nice to know we aren't the only "strange" ones out there:). As for the diapers...our friend in KY loved fuzzy bunz but I still have not been so brave...My sister in law just sewed some for their 1 1/2 year old and say it has helped him want to potty train more quickly! I have also heard of the healthy sleep habits book from Mary but have yet to read it as its not at our library:). Maybe the third time around is the charm! Good luck and let us know how it goes:). Christian is just growing so quickly, its making it hard for us to tell who we think he looks like! We can't wait to see you guys!

Christian might just be pacify-ing himself on you - you know, a nice, warm human pacifier. Every ten minutes is a lot even if he's in a growth spurt. Try putting one in his mouth when he wakes up and hopefully you can get more sleep.

A new cousin...congrats! And I'm so impressed that you're doing cloth diapers. Go Rachelmamma! Hey, speaking of sleeping, have you read "Healthy Sleep Habits, Happy Child" by Marc Weissbluth? (I'm sure I've already mentioned it to you a hundred times.) It is great--second only to the Book of Mormon in truthfulness!